Partenope, a clear reference to the Neapolitan genius in combining fountain pen and roller in a single solution with a new cartridge refill and converter system. The clip obtained from an ancient goldsmith process called "lost wax". The real placed on the hood depicts the great beauty of the Gulf of Naples. Finally, the head obtained with the 3D technique is enamelling! The result? A classic-modern silhouette without forgetting the Made in Italy.

This pen was a gift for my wife and her first ever fountain pen (post school days). She absolutely loves its looks and the smooth writing. A perfectly balanced Italian 👌
I love it's ivory feel.

Beautiful "avorio" imitation ivory resin looks as good as the name suggests. The red, green, and blue accents are a nice touch and go well with the ivory barrel and lighter blue grip and rear knob. Mine has a wonderfully smooth 1.1mm stub nib. (Bernadette's negative experience was not repeated with mine.) Fit & finish is excellent. Rather heavy, especially with the cap posted, but plenty large enough to write unposted. I find it comfortable either way. Surprise: It also came with a full Schmidt matching ballpoint section that can be swapped out for the fountain pen. Cute option.

B
Bernadette
Happy with the resin work and everything else, but the nib really needed help.

This pen is from a small, new company so I am inclined to give 4/5 stars. If this was an older company I would go right down to 3/5 stars or otherwise return this pen.

Out of the box, the presentation was amazing. The resin work is very good. I love the blue, as it's the kind of blue that matches my husband's Napoli FC shirt. Being produced in Napoli makes me inclined to keep this pen, which is why I decided to be very patient with it's shortcomings and tried to just troubleshoot it upon recieving it.

I attached some photos to this review. I initially tried dipping it and writing with it, but the ink was not really reaching the nib. So I looked on my loupe and found that the tines were misaligned. Fixed that, then discovered the feed fins were tilted so it was more or less just dumping ink on my finger and not the tip. I tried my best to fix that but you can still see from the photo that it's not perfect. Filled it up with Monteverde Horizon Blue and the ink was -still- not reaching the tip. Found that the nib was not at all aligned with the feed, so I had to nudge it. I'm very new to this hobby (<2 months). This is the third pen from Napoli I've recieved that had a bad writing experience out of the box. (Nettuno 1911 misaligned tines, Maiora Mithos with a scratchy nib). I hate to get into a North-South thing but my Pineider Avatar UR Extra Fine wrote smooth and is actually a little too wet for me out of the box.

But this is a pen from Napoli, from a small workshop that does good work, and it has the blue-grey of my husband's Napoli FC shirt. So I will keep it.

EDIT: oh and the rollerball portion of the pen writes just fine. 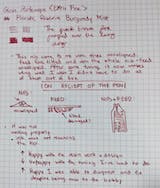 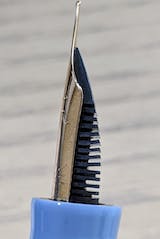 K
Kenrick Lam
Great and Unique Pen for the Price

First up, the pen looks like nothing else. Secondly, the fit and finish is a lot more premium than you'd expect at this price (like the details on the cap and the thickness of the material). It does weigh in a bit heavier than most other pens, and is weighted at the back due to the solid metal pieces. Otherwise it is gorgeous and beautiful. Nib works fine, standard Jowo nibs on this.