The Inkredible Box: Inkmeister is a go-to favorite. Discover products you never knew about, or never had the opportunity to try. Each month, we'll send you a surprise box with a selection of ink samples. We will also include a budget fountain pen (such as a LuoShi or Hongdian) so that you can test out the ink prior to using it in more expensive pens. Ink brands include: Taccia, Private Reserve, LAMY, Monteverde, Noodler's, Robert Oster, Visconti, and many more to come! We make sure this box is a great deal by sending some freebies you will enjoy, and also provide free shipping within the United States - it's like receiving a gift to yourself every month!

*Orders will ship within 5 business days of purchase.

I have received two monthly $30 subscription boxes and both contained black ink! I was hoping to add some variety to my starter collection, expecting at least different color inks in each box. Also pens were definitely starter pens.

As someone who loves trying all the inks (and has had over 200), I expected that only 1-2 of the ink samples in my box would be new to me, or that I'd end up with boring navy blue inks or something. So I was pleasantly surprised to discover 5 new inks (all Private Reserve pearlescent) in colors I enjoy! I was also tickled that my first box's "budget pen" was one I'd considered buying for myself before, and in my favorite color. The nib is either an F or EF, whereas my friend who ordered a box at the same time got a 1.1mm stub nib. I've only gotten 1 box so far, but it has impressed me and definitely lives up to the claim of value. 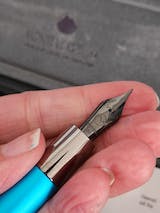 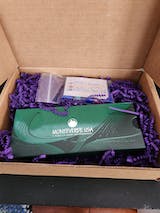 After the previous months impressive looking and feeling pen (which came in its own box) this month's offering was kind of disappointing. I know Kaweco pens are decent quality, but for the subscription price of $25 getting a $17 all plastic pen in a zip lock bag and ink samples, one or more of which leaked all over the inside of their own zip lock bag doesn't bode well for next month when the temperature will likely be below freezing out on my porch where deliveries are dropped. Still deciding if I should cancel my subscription.

The first month my subscription box was phenomenal. I sorta disliked the stub nib, but I overlooked that fact because it let me try out that nib AND my box was a $28 value!
But I got my second box this week (which was my Christmas present this year) and I've tried to like my pen, but frankly it sucks. The Kaweco Perkeo feels super cheap, all plastic, and the nib is scratchy. I wouldn't have purchased this pen as a rollerball, let alone a fountain pen. I'm sure there is a following for this pen, but it's definitely not me. Then the ink. 😒 Lamy Crystal in Benitoite. I would never have chosen that color. Ever. It's such a dark and depressing color, and now I'm stuck with a whole bottle of it. I'm REALLY trying not to hate it, but I think this will be my last box if it's gonna be an emotional rollercoaster ride like this monthly. This last box only saved me $3. I would have rather bought myself another Pilot Metropolitan or several bottles of ink instead of wasting $30.

I love getting the Inkredible Box: Inkmeister Monthly Subscription. It's fun to see the surprise fountain pen waiting for me as I open each monthly box. Chris has always been "Johnny on the spot" whenever I've had an issue needing resolved. This is a great business I'm proud to support.