Made from natural resin uniquely mixed to represent palettes of oil paint, this Visconti Van Gogh series is inspired by the artist's color and technique. Each pen represents a specific Van Gogh painting. The pen utilizes Visconti's eighteen-faceted design, with the many edges enhancing its vivid colors. This Novel Reader inspired fountain pen features gold trim and a gold-plated steel nib. A converter is included, and it also accepts standard international short cartridges.

As a special introductory offer, it comes in a special gift box that includes a matching bottle of a Visconti green ink.

We do our best to photograph the pens to show how they will appear in person, but due to the nature of the material, expect some variation in the pattern from what you see here.

Confession: i bought this pen because I love the painting "The Novel Reader." I owned a Visconti pen in the same price point in the past and don't recall feeling passionate about it. Nevertheless, i wanted this as a collector's item. The pen arrived quickly and carefully packaged by Truphae (thanks guys!), in a sturdy gift box bearing the painting. The pen has beautiful gold hardware and the body resin has swirly green and purple shades reminiscent of the painting. The magnetic capping is a nice feature. I ordered the Broad nib and would call it a U.S. Medium. It's not as broad as, say, a Monteverde broad. It's slightly scratchy out of the box, not a buttery smooth nib like a Pilot Custom. The ink, though, is practically invisible. It's such a faint yellow-green, it barely showed up on pristine white paper, much less a cream paper like Tomoe River. I won't be using it, but it looks nice in the giftbox. 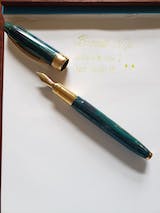